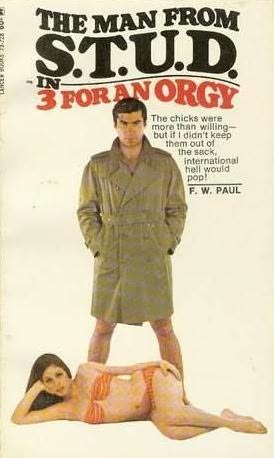 
There's nothing extraordinary about Bret Steele. Nothing except his talent for finding a luscious babe panting with passion under every haystack - and a haystack everywhere he turns. A talent which makes life very pleasant most of the time - but also makes things a bit tricky when he has to act as bodyguard to a trio of the most fabulous female bodies he's ever seen and make sure at least one of them remains a virgin! And just to complicate matters, he has no way of being sure which chick is the really important one.. But Bret Steele is the man from S.T.u.D., and always gets S.T.U.D.'s most erotic assignments. Is it his fault that in this one the girls gang up on him? Is it his fault that he keeps faling over his own feet (and usually landing in bed)? Here's your chance to find out, as you read the most hilarious laugh romp yet - and meet The Man from S.T.U.D.!