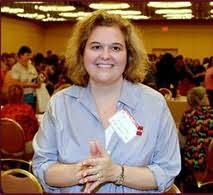 aka Darby Kane
HelenKay Dimon is an award-winning author of more than a dozen novels and novellas. Her first single title, Your Mouth Drives Me Crazy, was excerpted in Cosmopolitan magazine in August '07 and spotlighted at E! Online. She made Cosmopolitan a second time in December 2009 with her novella "It's Hotter At Christmas" from the Kissing Santa Claus anthology. Her books also have been published by Doubleday Book Club and Rhapsody Book Club and translated into several languages.

After twelve years as a divorce lawyer specializing in unhappy endings, HelenKay now writes romance for a living. The sudden career change resulted from her husband getting one of those "can't turn it down" job offers. With only a few months' notice, his work took the family from Maryland to their current home in California. So, instead of days filled with court, clients and a great deal of whining and complaining, HelenKay now writes for a living. She thinks of herself as a "recovering lawyer" and is grateful every day for the ability to write full time. HelenKay Dimon's page on Fantastic Fiction