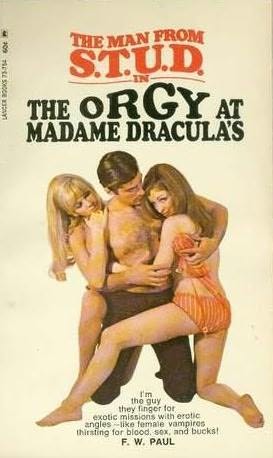 
Bret Steele is on the job again. This time it's a "simple" matter of delivering a million dollars to a fortunate client. But if it was really simple, they'd never have given the mission to Bret Steele, specialist in far-out erotic problems. Where Steele goes, there are sure to be pantingly eager chicks in his path . . . and his secret of success is the way he handles them! So.the client, it seems, has gone to a place called Transylvania, which isn't on the map. But Steele meets a voluptuous babe who can show him the way.among other things. And by the time he arrives, he picks up more women than he can shake a stick at, all of them ready for fun and games, but some of them out for blood - his blood - as well. The minor roadblocks range from mad witches to modern gangsters, but the vampires are the main one - and when you're seduced by a vampire, you know you're seduced!


Visitors also looked at these books