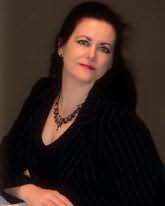 She turned to indie publishing in 2011. Her indie titles have been nominated three times for Book Of The Year. She has been a national magazine editor and for a decade she taught romance writing at Grant MacEwan University.

She is addicted to Irish Breakfast tea and chocolate, sometimes taken together. In her spare time she enjoys sewing, history, Sherlock Holmes, science fiction and ignoring her treadmill. An Australian, she lives in Edmonton, Canada with her husband, a professional wrestler, where she moved in 1996 after meeting him on-line. Tracy Cooper-Posey's page on Fantastic Fiction